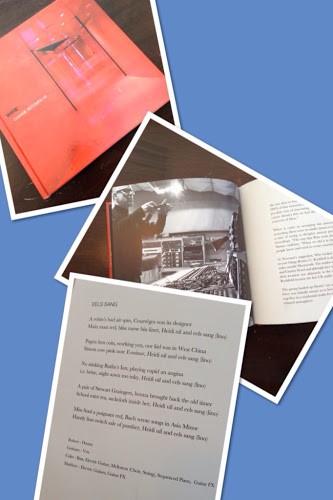 A short while ago, I posted a review of Parquet Courts in concert and called it "Buzz Buzz In Your Eardrum," after the Wire song Eardrum Buzz from 1989. Anyone catch the reference? After all, it was (I just learned) their highest charting single and Wire gets a mention in nearly every Parquet Courts review, mainly thanks to the extremely short songs on each band's debut album. However, even after over 35 years of music and their continuously fascinating travels just under the radar, no one really sounds like Wire.

As with Bowie, Dylan, and other artists with legendary careers, when presented with new output I prefer to deal with the matter at hand and avoid delving too deeply into history and comparisons. Suffice it to say, if Wire had never recovered from the spectacular flameout which followed on the heels of being dropped by EMI after the release of their third album, 154, in 1979, they would still be considered one of the most significant bands of the post-punk era.

But the fact is that they did regroup - twice, first in 1985 and again in 1999 - and now show no signs of slowing down. Even the loss of founding guitarist Bruce Gilbert in 2004 was merely a bump in the road for the band, which now consists of Colin Newman (vocals, guitars, keys), Graham Lewis (bass, vocals, most lyrics), Robert Grey (drums), and Matthew Simms (guitars).

Change Becomes Us is their new record and I snapped up on of the 1,000 copies of the special edition, which comes in a book form including essays by the band and Mike Barnes, as well as photos, lyrics and complete credits. It's a beautiful object, though not excessively precious, and is well-served by the band's overall intelligence and awareness of their process. Though it is not required reading, anyone who loves the sounds on the record will find them enhanced by the words in the book - the first sentence of which forces me to break my rule slightly, as it makes clear that their history is deeply intertwined with this new release.

"The first question any knowledgeable Wire fan might ask about Change Becomes Us is whether it's a new album or a 'project,'" they write, and the short answer is both. Several of the songs arose out of revisiting material that was essentially unfinished (or at least undercooked) when they first broke up in 1979. So in a way, they are completing a circle, but there's a tail on the circle, a way out and forward, like on the letter Q. An appropriate image as Q must be one of their favorite letters, encompassing such words as quirky, questing, questioning, and querulous, all of which can be used to describe Wire.

Other words often used are chilly, disconnected, cerebral, which are certainly apt as well, but some of the songs on Change Becomes Us have me thinking that they are often describing those states rather than necessarily embodying them - which is a long way of saying that there is emotional content on this album and I connect to it. I think it's always been there, but it's just been getting more and more accessible. That's not due to any kind of softening, as they can still spray chords and drill rhythms like few other bands, but more the result of continuous honing and artistic (and possibly personal) growth. Change becomes them, indeed.

Graham Lewis can be an incisive lyricist or a conceptual one, and sometimes both simultaenously as on one of the album's best songs, Re-Invent Your Second Wheel: "Your outer skin it will not peel," he sings, "Give me a hint of how you feel/Please raise your face, put down your shield/Then re-invent your second wheel." It's hard to imagine a more direct plea for rejuvenating a relationship, but then the chorus, sung in a croon both seductive and arch, is, "VBFC HOQP TMNY JUXD/UASU RYLI VBFC HOQP." You'll want to join in even if you didn't know that "The basis of the refrain is still an attempt to use all the letters in the alphabet and make it sound good. I kept the letters because it reminded me of R&B and Tamla Motown, like the Jackson Five's 'ABC'."

Wire are a music critic's dream and I could go on like that ad infinitum. But I won't. Change Becomes Us is just too good a record and I wouldn't want my prattle to stand in the way of the experience. I will simply say that every song perfectly combines craft and refinement with the energy and immediacy of live performance. You'll catch some of the words, but they are worth reading (and look great on the page), and close listening will reveal the immersive depths of the layers of guitars and keyboards. This is as good as rock music gets in 2013 and the fact that it represents only the latest example of Wire's long tradition of excellence is merely a dewdrop on the petal (I could've said "icing on the cake" but Lewis's lyrics inspired me to reach beyond cliché). Wire will be touring the U.S. extensively in July - I will be catching them at Bowery Ballroom on July 16th.